The Garden of Roses

They say that walking is the best exercise, and for myself, I agree one-hundred percent. This weekend was too nice to stay indoors, so my parents and I ventured to a new state park on Saturday for some walking of trails. The first trail seemed very nice; when I think of parks, this is what I always have in mind: paved trails, trees that provide shade and the occasional bridge walkways where thick underbrush or tricking streams are underneath your feet. This one had it all and the destination of the first trail was a waterfall. No sign mentioned sand (like a beach.) We near towards the area where the falls is located and I mention that the area looked much like Mesa Verde, minus the ancient cliff-dwelling houses. Then I get my walker stuck in the sand. 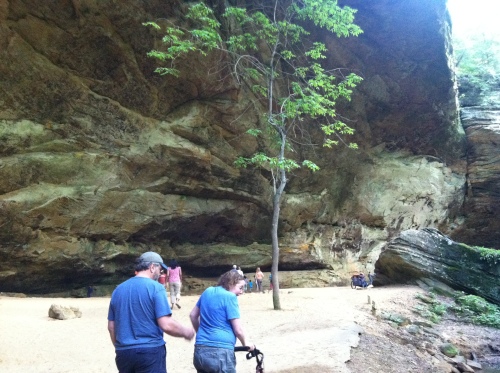 There was a set of stairs (far off behind the rock in the picture) and realizing walking in the sand is worse than grass, I told Mom and Dad that I would take a rest while they saw the falls. It was an enjoyable sit…and I was able to walk part of another trail that night too. 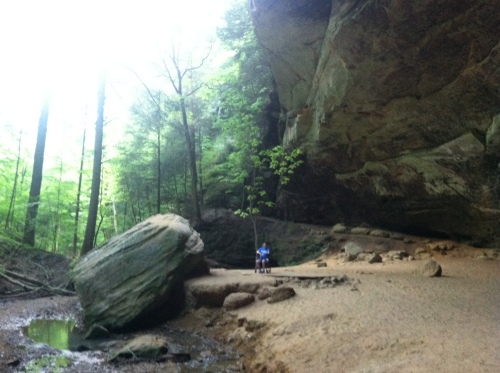 I probably should have taken a nap on Sunday, even though I did “rest” by simply sitting and reading, but I am not sure if that would have fully helped yesterday anyway. Scheduled for a fun day at Melissa’s, we started with a delicious brunch: gluten-free waffles, fruit, bacon and David made scrambled eggs with green peppers and onions (yum.) Eating and chatting outside on the back patio–and not drinking as much as I should have–I think my dehydration may have started then.

Columbus is filled with many pretty parks. We chose Whetstone Park, because they have a Park of Roses in the midst of it all. Maybe we were trying to make a loop, but we seemed to start randomly just by parking and cutting across the grass to the paved trail. Grass entirely wears me out, so by the time we get to the cement, my legs are already saying that they’ve had enough. Basho was with us and seeing him thoroughly enjoying himself–running everywhere, barking at the bigger dogs, never begging to be picked up or have a ride in my walker–gave me humor and something to enjoy besides thoughts of my slow walking.

Once we reached the entrance to the Park of Roses, I was in my slowest state of walking. In every step, my mind kept saying that it didn’t want to take another, but then my feet would…like an automatic response to the word walk. We passed by the herb garden and I saw the perennials from a distance. I had greater expectations for this section, especially the roses; we were a few weeks early for full-bloom, but there were a few rose bushes in bloom and you could see the start of the rose section blooming as well.

I didn’t venture far off the path, but as I am struggling to get to a bench to sit (that’s me in the left hand corner of the picture) and take a drink of over-needed water, I thought of Jesus. It just came to mind–all I saw was bloodied, dirt-stained, sandal feet moving forward one step at a time. Jesus wasn’t pushing a walker on a paved or grassy path; beaten beyond recognition, he was carrying the heavy wooden beam of his cross and walking up a hill (which I imagine was just a rocky, dirt path.)

He walks with me to the end, until life forever in His presence.

***All pictures taken by Bonnie Pinkerton***

Last summer, I had the opportunity to take part in the Children’s Tumor Foundation NF Walk. This fundraiser walk proceeds funding for continued awareness and research about the disease, as well as treatments for those individuals living with either NF1 or NF2. The Children’s Tumor Foundation selects cities across the states and holds this event all throughout the summer. Last summer, I got the information for the walk taking place in Cincinnati. It was more a spontaneous decision, but I was very humbled by all the support we quickly raised.

Participating in the walk was very special. At that point in time, I knew my options for treatments were getting slim, but never imagined the upcoming year that lay ahead of me. So while we were waiting for the walk to begin, we chatted with some other participants, who all had NF1. I was not surprised…I actually think that I was the only NF2 person there. Sitting down for a few minutes, Melissa came with the idea to write why we were taking part in the walk:

When I learned that the NF Walk would again be in Cincinnati this coming June, I knew I would want to participate. Last year it took me an hour to walk the two-mile course…I used my walking sticks and towards the last stretch, depended on the arms of my sister and aunt. This year, my plan is to push a wheelchair–when I no longer have energy and need to rest, I will depend on someone else to help me to the finish point..walking the second mile.

My Team name is”A Mile in Mel’s Shoes.” Through this blog, you have experienced the journey right alongside me–the sorrows and heartaches, questions and pondering thoughts, cheerfulness and laughter. Unlike the set course of the NF Walk, the next mile in my life is uncharted. It is a walk of faith. You have walked the first mile in my shoes–and I know you will be there, ready to continue walking another.

Linked below is the website for Team “A Mile in Mel’s Shoes.” If you are interested in joining me, my parents and two best friends since grade-school (coming for a weekend visit! 🙂 ), click on the “Join my team” button for registration. If you would like to give in donations, please select “Donate now.” You can also donate to a team member’s personal page (names are listed at the bottom of the Team page), where comments can also be written. All donations given on either goes towards the team goal.

Click here for link: Team A Mile in Mel’s Shoes

If you would like to send a donation by check, please send it to the following address:

Thank you for walking with me. The journey continues, one step at a time.

Filed under Adjusting to NF2, Books and Movies, Family Times

Birds of a Feather

I read this quote in college during the semester I was on the Tarceva oral chemo pills. Amidst chemo, my strenuous 18 credit hours and volunteer time…I found the quote so amusing and fitting to myself that I adopted it for my “quote” of the semester.

Be like a duck. Calm on the surface, but always paddling like the dickens underneath. ~Michael Caine

It is nothing theological, philosophical or life changing; in spite of myself, I did not do a good job that semester of keeping calm on the surface…even though everything in me was paddling underneath.

I have not thought of that quote in quite sometime. It was only until Mom and I took a walk around the community park/pond that it resurfaced in my memory. We pull up to the park and see the paparazzi of ducks approaching our car. Mom mentioned we should have brought bread. I remembered that I had one packet of graham crackers left over from the hospital in my purse. Success: 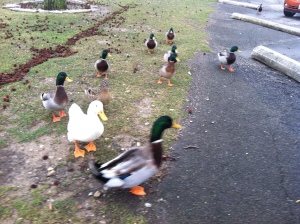 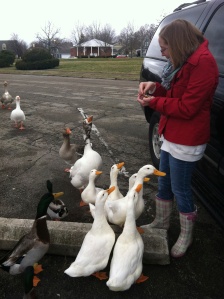 The small packet of crackers did not last long, even though I tried breaking off small pieces–so we just started to take our walk. Most followed us:

After realizing we had no more food, they made a rondevu at our car. 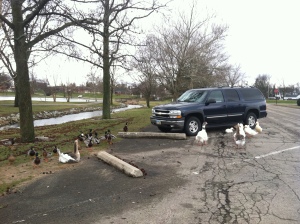 Some needed a little nudge to get out of the way… 🙂 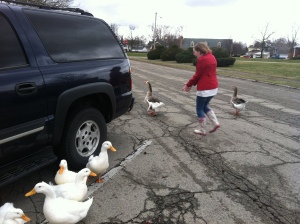 This little time at the park reminded me of when Jesus fed the five thousand (Matthew 14:13-21). Jesus went to a remote spot to be by himself. The crowds (like our ducks) followed him…seeking Him to meet their physical needs. Jesus did not send them away, like my nudge to the ducks, but had compassion on them. Come dinnertime–Jesus did not have graham crackers, but the disciples had two fish and five loaves of bread. His disciples questioned as to how they could feed these people with only this small amount of food? It was a step of faith to believe that Jesus could feed all. And He did–with abundant left overs! The people did not long for more like the ducks at the park. They left satisfied.

So often I come to God like a duck. I can pretend on the outside to have everything calm and under control. But I do not. My inner being tries to control everything from having a productive schedule to keeping my medicines list straight. It starts to consume me on the inside even if I am calm on the outside. But God sees me as I am: a duck ready for graham crackers–hoping for more than just a life running off a time schedule.

I write this now, because I know it will happen. It is my transition stage–going from high activity and bustle of health related issues to entering the days of “normality.” When this happens, I see my high dependency in Christ diminish. I start taking things back in my own hands; in busyness, I forget to take time to sit and rest; and I easily question the simple tests of faith like the disciples.

It is dinnertime and I don’t want to leave the mountain yet; I still have so much yet to learn.

Come to me, all you who are weary and burdened, and I will give you rest. Take my yoke upon you and learn from me, for I am gentle and humble in heart, and you will find rest for your souls. For my yoke is easy and my burden is light. ~Matthew 11:28-30

Tagged as ducks, feeding ducks, learning to rest, The Gospel of Matthew, walking by faith