The Garden of Roses

They say that walking is the best exercise, and for myself, I agree one-hundred percent. This weekend was too nice to stay indoors, so my parents and I ventured to a new state park on Saturday for some walking of trails. The first trail seemed very nice; when I think of parks, this is what I always have in mind: paved trails, trees that provide shade and the occasional bridge walkways where thick underbrush or tricking streams are underneath your feet. This one had it all and the destination of the first trail was a waterfall. No sign mentioned sand (like a beach.) We near towards the area where the falls is located and I mention that the area looked much like Mesa Verde, minus the ancient cliff-dwelling houses. Then I get my walker stuck in the sand.

There was a set of stairs (far off behind the rock in the picture) and realizing walking in the sand is worse than grass, I told Mom and Dad that I would take a rest while they saw the falls. It was an enjoyable sit…and I was able to walk part of another trail that night too.

I probably should have taken a nap on Sunday, even though I did “rest” by simply sitting and reading, but I am not sure if that would have fully helped yesterday anyway. Scheduled for a fun day at Melissa’s, we started with a delicious brunch: gluten-free waffles, fruit, bacon and David made scrambled eggs with green peppers and onions (yum.) Eating and chatting outside on the back patio–and not drinking as much as I should have–I think my dehydration may have started then.

Columbus is filled with many pretty parks. We chose Whetstone Park, because they have a Park of Roses in the midst of it all. Maybe we were trying to make a loop, but we seemed to start randomly just by parking and cutting across the grass to the paved trail. Grass entirely wears me out, so by the time we get to the cement, my legs are already saying that they’ve had enough. Basho was with us and seeing him thoroughly enjoying himself–running everywhere, barking at the bigger dogs, never begging to be picked up or have a ride in my walker–gave me humor and something to enjoy besides thoughts of my slow walking. 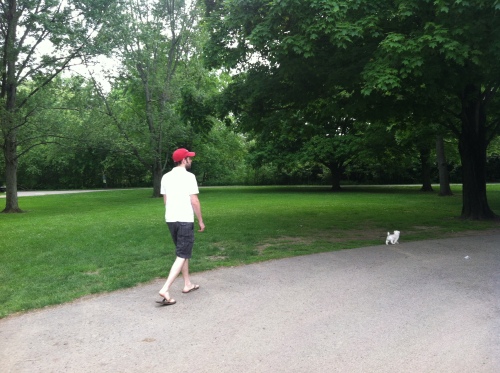 Once we reached the entrance to the Park of Roses, I was in my slowest state of walking. In every step, my mind kept saying that it didn’t want to take another, but then my feet would…like an automatic response to the word walk. We passed by the herb garden and I saw the perennials from a distance. I had greater expectations for this section, especially the roses; we were a few weeks early for full-bloom, but there were a few rose bushes in bloom and you could see the start of the rose section blooming as well.

I didn’t venture far off the path, but as I am struggling to get to a bench to sit (that’s me in the left hand corner of the picture) and take a drink of over-needed water, I thought of Jesus. It just came to mind–all I saw was bloodied, dirt-stained, sandal feet moving forward one step at a time. Jesus wasn’t pushing a walker on a paved or grassy path; beaten beyond recognition, he was carrying the heavy wooden beam of his cross and walking up a hill (which I imagine was just a rocky, dirt path.)

He walks with me to the end, until life forever in His presence.

***All pictures taken by Bonnie Pinkerton***