Tag Archives: walking down the stairs

Over the weekend, I finally accomplished putting into chronological order and placing my college to present pictures in photo albums. It brought back many great memories. As I sorted, I found these pictures that made me laugh at the memory of the evening: 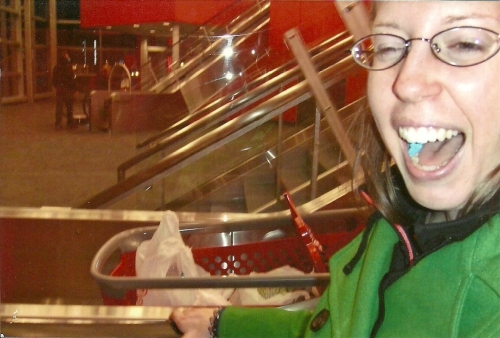 During my years living in the Denver area, I lived in a neighborhood called Bel Mar. On the corner of Wadsworth and Alameda, this was the rising place for living and shopping. The Target I was employed at was about fifteen minutes from Bel Mar…connected to a flat mall that had an indoor mile track that ran its course around the stores. I enjoyed a mile walk on my lunch breaks. I think every mall should be modeled after that one.

Even though there were a few Target stores in the area, Bel Mar also built one a few months before I moved. It was one of the “new city” model styles where the parking garage was underneath on the “first floor,” making the actual retail store on the second floor, all of course equipped with escalators, a stairway, and an elevator. I opted for the escalators.

Mom came to Denver every other week to help me on my chemo weekends. After the grand opening of Target (we had watched it being built over time), I wanted to show her the inside of the new Target. Up until this point, I had only been in a few times, because it was more convenient for me just to get my needs and groceries from my Super Target rather than stop at another one on the way home. But with Mom, we had grabbed a few groceries and as we left, I made a discovery: they even had an escalator for your carts!!! I was laughing so hard, Mom was afraid I would fall down our own escalator. 🙂

Currently, I have recently developed a phobia of walking down the stairs. Going up the stairs is not a problem; just coming down. Too many falls in the past few months has triggered this phobia, but I can’t say that I had really classified it as a fear up until a few weeks ago when I mentioned it to a friend. Now I am not even sure if it is just the stairs I fear falling–I think it is falling in general.

With my balance continuing to worsen, I have now restarted Physical Therapy, but it takes place here at my house. Due to the decline of function in my hands (especially the right hand), I will also be starting soon some sessions of Occupational Therapy. The reason for having the sessions here at home is to help me with my everyday living. For example, because I started my first PT session last week, we did a huge overview of my current conditions and discussed the areas in which I need assistance. Most of my current frustrations deal in the realm of OT, but balance was a major issue for me in PT. She gave me a suggestion for going down the stairs sideways, but to be honest, it doesn’t make me feel any better about the decline. As for right now we are mainly focusing on extra balancing exercises to accompany the PT strengthening exercises I have been doing already.

To access my current conditions, my therapist had me perform some “strength and mobility” tests. I can only stand on one foot for a mere one or two seconds…and standing with one foot in front of the other depends on which foot is placed first. Considering I have had two blood clots in my left leg, don’t be surprised to hear that it is my stronger leg. I think it always has been to be honest. When we lived in Colorado, I did get the chance to learn how to snowboard before my balance would no longer permit the activity. My Dad insisted that my sister and I take a half day of lessons before we just went out on our own. At the rental shop, when deciphering which foot you will put forward on the board, the rental personal did a little test. He had me turn around and gave me a slight nudge. I put my left foot forward first. He said, “You’re a regular foot.” (A right foot is called a goofy foot.) I think if anyone gave me a little nudge today, I would just fall over.

I lift up my eyes to the hills. From where does my help come? My help comes from the Lord, who made heaven and earth.