Chick-Fil-A Made My Day

Which came first? The chick or the Chick-Fil-A sandwich? If this were a test, I might just “when in doubt, Charlie out,” and say, “C: the peppermint milkshake.” 🙂

Okay, seriously now–Saturday was a grand day! A day of family, friends, fellowship and feasting. All provided by Chick-Fil-A. Even the cow mascot came and this time, I didn’t have to chase it down for a picture. Because it came to see me. So how did this come about? Well, let me tell you, but first a brief history.

I have no recollection of Chick-Fil-A while growing up. I ate a chicken sandwich once my sophomore or so year of high school when my mom and I attended a Girls of Grace conference in Littleton with my best friend and her mom. It was the lunch passed out…no fries, but a bag of chips and an apple. No sweet teas or milkshakes, but water. Chick-Fil-A was just not something we ate. In our hometown, we had Dairy  Queen, Pizza Hut, Subway and a few family owned Mexican restaurants that nothing can ever compare to in taste! Or family road trips were always the same–Wendy’s. And we had extreme customer loyalty, no natter how many times our order was incorrect. Being older now, I appreciate the menue of baked potatoes and chili. But in younger years, it was the fries dipped in your frosty and the cool prizes placed in the kid’s meal bags. The days of Carmen San Diego–and they gave detective kits! Another time, there were these plastic visors. Inside they were blue, but in the sun, they turned purple. I still had mine in the seventh grade, because I wore it at a summer church camp. Yes, I can’t hear you, but I know you are laughing. I do too–especially when I see the proof in my photo album. 🙂

College was Atlanta Bread and Srarbucks, so it wasn’t until post-grad that I ate Chick-Fil-A …only a few times in Denver, usually at the mall food court when I was shopping. The turn-over was January of 2010 when I went for ten days to see family in NC and VA. As my aunt and I picked up my cousin from the airport on our way to my grandparents, we went to a Chck-Fil-A drive-thru to order my cousin a meal. They asked if I wanted anything, say a peppermint milkshake–I said I had never tried one. Their utter disbelief quickly turned into an order. Then I was in utter disbelief–

When we first moved here, I had been transferred, so I had a job when all the process was complete; this was a huge blessing! However, I moved from one of the biggest SuperTarget stores in west Denver, attached to the coolest flat mall with an indoor mile loop connecting the stores to just a simple Target. No deli, bakery, legitimize food section or Starbucks. Even cash office felt like going from an executive’s office to a cubicle, but I found my co-workers and leaders tremendously kind and to satisfy the stomach, well, Chick-Fil-A is right across the parking lot. 🙂

I only partake leadership roles, ever so enthusiastically, when it is something I am extremely passionate about (such as training all the new cash officers before ending my time at Target) or if it is random sounding fun. In the case of the summer after the move, it was the latter of the two. The idea of dressing like a cow for a free chicken sandwich was hilarious! I went home to tell the family, who were not so enthusiastic at first (except Mom). but I finally got some more support from Uncle Kim and off we went for our first experience of Cow Appreciation Day!  Of course , Dad did not want to stand out in the herd and went as Farmer Brown…they still gave him a free sandwich for good humor. 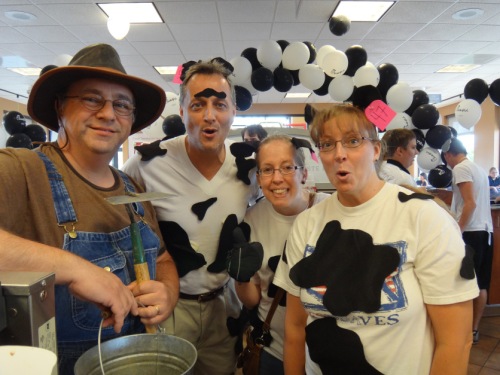 “You’ll never guess this surprise!” Mom tells me, grinning and sort of laughing simutaneously. She was right, I would have never guessed–Uncle Kim’s daughter now works for Chick-Fil-A. I still do not understand as the why or what old pictures she and her boss stumbled upon one day, but my family and I were in one. After hearing about my story and condition, her boss wanted to express kindness and called my Mom. Chick-Fil-A would cater in for a party…I could invite as many people as I wanted, we just had to give them some possible dates and an estimate of how many guests. They took care of everything else; Mom made the invitations, then we waited for the day to come!

I actually was grumpy that morning. I was frustrated at my eyes and how dark even the outdoors seemed to be. My intestines have been quite intolerable lately and time (when I feel rushed) flusters me. I didn’t even have to do anything but put on my shoes after coffee and I still felt this way. Marcia came in to paint my nails–talking with her helped me forget the woes and I even had time to put on a touch of make-up (a little blush,) 🙂

By the time Chick-Fil-A and other guests arrived, I forgot everything…the grumpies, sick feeling, even that the party started for me. It was like a big potluck and I was talking so much, I didn’t get a chance to finish eating until most everyone had left. The lunch was more than food for the stomach, it was food for my soul. Ever since eye surgery, I have been missing steady fellowship. Trying to make it on your own is just not possible…yes, I have the access of snail mail and social media avenues, but it is not the same as face to face. Saturday was not about me, per say, but about fellowship–building each other up, encouraging one another and getting to know each other better. This Cbristmas has been so different for me. Mostly because I am in a season of deeper physical change, leaving me also seeking spiritual strength that is often hard to find on the bad days. But Saturday brought a day of joy…laughter that I have been seeking. Ahd I can’t thank Chick-Fil-A enough for the kindness extended towards my family and I. It is a memory to cherish. 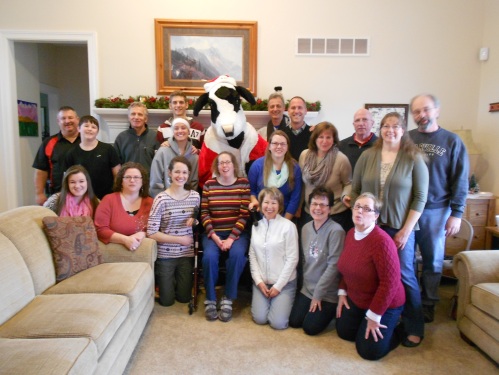 And so, as Tiny Tim observed, ‘God bless us, every one.’

6 responses to “Chick-Fil-A Made My Day”