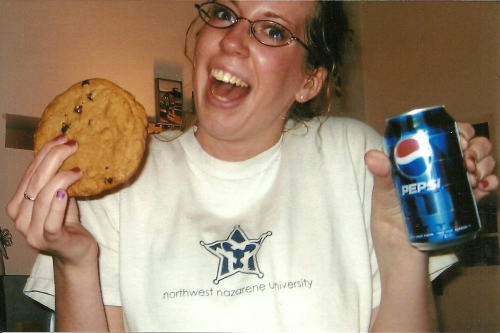 This is me. College freshman at best. It was the year I embraced carbonated soft drink’s invitation to lunch everyday, often getting together again for dinner or a late night study in the Student Union. Pepsi became my friend; the terms tea or coffee were unheard of in our conversations.

Things started to change my sophomore year–I was not as dependent on my carbonated soda friend. I started making new acquaintances in the social world of caffeine. I spent my time rotating between the new friends, such as soy chai, and my old soda friend…who by now had changed its name to Coke.

As I stared to mature, I added a few more friends: iced and herbal teas. All these caffeine friendships demanding my attention. Some days I would ignore them all; other days I found it necessary to enjoy one or even two. Don’t get me wrong, I still find my best friend is water, but on the downside–it is a bit bland.

So why all this? Because my friendship with carbonated soft drinks has come to an official end. I spent Monday’s car ride home lamenting on good days past–good times, good tastes, good vibes.

At the end of September, I started seeing colored spots. If I looked at you directly, you would have been green or black depending on the other lighting in the surrouding area. At first, it came and went…by the first of October I realized that the problem was happening more frequent. By the time I mentioned the problem to my parents (in which we decided this was something more than just fatigue or dry eyes), the problem was constant. Doctors sent me to a neurooncologist who discovered that my optic nerves were swollen (and I did have extremely dry eyes!)

I do not have tumors on my optic nerves, but there was pressure on the nerves from other tumors in the brain that made the optic nerves swollen, resulting in the colored vision. The doctor started me on a medicine that would decrease the swelling and keep the nerves stable. There were to be no major health side affects from the medicine and I was assured that I could be on this medicine for life if needed without it causing problems that you sometimes see in other medicines after taking them for so long: I would not become immune to these pills.

But there was a sacrifice: the only side effect that affected me personally was that these pills had a bitter revenge on my soda friend–so much so, that it would make soda taste like metal. I tried to keep upbeat about the current loss, which I deemed temporary. I figured I would be off the pills in no time! I just needed to get my optic nerves unswollen! 🙂 But after the next doctors appointment, it seemed that this was going to be a long-term situation.

I did not really lament much over winter: warm teas and coffees were satisfactory. Then I started having salads for lunch and the thought came to mind: this would be so perfect with a Coke. And then it started: my cravings for my carbonated soda friend! I had already experienced the metalic tasting soda once before and because I remembered how I about spit out my Sprite a few days after I started the medicine–I took a full embrace for ice tea with my salads instead. More specifically Arizona tea in the can! (The kind you find a gas stations for 99 cents.) The plan was genius! It made me feel as if I was drinking Coke, but I was not.

Then this past weekend: my first blunder resulting from hurried decision-making and McDonald’s lack of lemonade the day I order a meal to go. “No lemonade!?” I say–feeling pressure from the line behind me. I could have said, “Ok, well I will take an iced tea,” or substituted it for a Shamrock shake. But no…before I have time to think of the words coming from my mouth, I blurt out, “I will take a Dr. Pepper then.” What!?! Don’t ask. I don’t know where it came from either. It took getting to the car to realize my mistake. I went ahead and tried it anyway.

First sip: “Yeah, that is not a Dr. Pepper taste.”

Second sip: “This burns my throat. Maybe if I try leaving some fries in my mouth, it will help the taste.”

Fourth sip: “I sort of taste the Dr. Pepper right when it goes in my mouth. Maybe if I swallow fast!”

I get about three more sips in, then abandon all hopes of enjoying my drink. It was then I realized, it is over.

So, my dear carbonated soft drink friend, I bid you adieu. I will no longer be tempted by your advertisements or have cravings for you when I walk down the drink isles at the grocery store. And if I do, I will just remember what the writer of Ecclesiastes states, “For everything that happens in life—there is a season, a right time for everything under heaven (3:1).”