I never took note of this, or maybe most calendars don’t add it to their days–but I noticed on my new calendar that today is Abraham Lincoln’s birthday. That is what it says. I went around the house and checked other calendars to see if it was posted on their February 12th as well. I found one that said it again, along with the date: 1809. 🙂

In light of Lincoln’s birthday, I thought I would share with you my favorite quote:

If you look for the bad in people expecting to find it, you surely will.

I first heard this quote on Disney’s classic, Pollyanna. Pollyanna, a missionary child, is sent to live with her rich aunt after the death of her parents. Encountering a whole different world–now being rich–Pollyanna never seems to lose her spirit of spreading joy, simplicity and gladness with others. She even teaches everyone her “Glad game.” It starts to spread around town, changing people as they start to see life with a different attitude.

Because her aunt is rich and powerful, much of the town is run by her decision, even the sermons at church. During an afternoon talk with the preacher, Pollyanna asked if the minister liked being the preacher of the town. She follows by sharing stories of her father (who had also been a minister) and said that he found a quote that helped him when he got discouraged. It was engraved in her necklace. It was this Abraham Lincoln quote. In reading the quote, the minister realizes that he has been using his pulpit as a way of condemnation. He learns to love his congregation, and in return…more joy and gladness spreads around the town.

I can’t say much about Abraham Lincoln’s life. I don’t honestly know much about it. I know big events, such as the battles of the Civil War and some of his speeches but nothing past that. However, what I have read in glimpse formats throughout some books is that he respected all mankind. Like Pollyanna, that attitude spread–even in spite of the Civil War. He did not agree with everyone, but he had respect. The Apostle Paul writes in Romans 12:16-21,

Live in harmony with one another. Do not be haughty, but associate with the lowly. Never be wise in your own sight. Repay no one evil for evil, but give thought to do what is honorable in the sight of all. If possible, so far as it depends on you, live peaceably with all. Beloved, never avenge yourselves, but leave it to the wrath of God, for it is written,

‘Vengeance is mine, I will repay’, says the Lord.

To the contrary, ‘if your enemy is hungry, feed him; if he is thirsty, give him something to drink; for by so doing you will heap burning coals on his head.’ Do not be overcome by evil, but overcome evil with good.

Valentine’s Day is only but a few short days away. What greater lesson to remember than to seek the good in others, even loving our enemies.

With malice towards none; with charity for all; with firmness in the right, as God gives us to see the right, let us strive to finish the work we are in; to bind up the nation’s wounds[.] 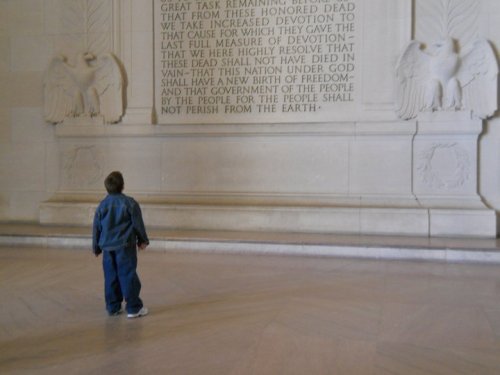 Standing close to where the Gettysburg Address was said. Gettysburg Cemetary, PA.