Think of the color red. What comes to mind? I see a bright red, almost like a Delicious apple. I see lipstick. I see STOP signs. These are the first things I think of when I say the word, “red.” Isn’t it interesting to think that we all see different shades of colors? My shade of red is not the same of your shade of red. Not sure where I heard that, but I did once…maybe in a science class. Just another example of how unique each person is. 🙂 (Don’t believe me? Look it up. I just did and found many sites to confirm.) 🙂

Red. Seems to be the infamous color of most major sports teams here in this side of the country. I see red every day at work…I even wear a red shirt. (Of course some have seen their better days. I have a red shirt with pink polka dots on the bottom. I was helping a lady get things out of her cart and did not realize that her Clorox was leaking…or had been leaking her whole shopping trip. The grand finale was all over my red shirt and hands. I was very clean, but the smell gave me a headache. To reduce the white spots, we colored it in with a red magic marker. Genius, but it is now fading with every wash.)

Beauty: Male birds such as Cardinals–very bold red! There are also Robins…their chest is a shade of red/orange. The only other red bird that I can pick out in the crowd is named…are you ready for this? It’s named “Purple Finch.” What on earth?!? It is red! I don’t understand that one! But hey, we all see different shades of colors. 😉 I found a website where it names all the birds (primarily the North American birds) that have shades of red. Very interesting. http://www.whatbird.com/browse/objs/all/birds_na_147/110/color/2066/red

Old barns. (Why do farmers paint them red anyway? Is it for a specific purpose or just the classic farm look? Either way, I think they are beautiful to see among the farm-house and equipment.) There are also a lot of red fruits (which happen to be my favorite!) Strawberries, cherries, tomatoes, watermelons, raspberries, cranberries, grapes and apples–each designed in a different shade of red and also flavor.

There is beauty in red when I think of love. There are red hearts and red roses. Just thinking of love made me think of passion. Passion reminded me of lust. Did you know that “lust” is an actual shade of red? I just learned this! Of course in context and definition, love and lust have different connotations. Love, so much more than just Valentine’s Day. C.S. Lewis said,

To love at all is to be vulnerable. Love anything, and your heart will certainly be wrung and possibly broken. If you want to make sure of keeping it intact, you must give your heart to no one, not even to an animal. Wrap it carefully round with hobbies and little luxuries; avoid all entanglements; lock it up safe in the casket or coffin of your selfishness. But in that casket-safe, dark, motionless, airless–it will change. It will not be broken; it will become unbreakable, impenetrable, irredeemable.

There is a beauty in symbolism, such as the USA flag. As Secretary of the Continental Congress, Charles Thompson said, “Red, [signifies] hardiness and valour,” (Duane Streufert. 2005.) There is a red ring within the Olympics five rings (representing the five continents). And of course Christmas. Red and green. There are obvious ones that I am not sure of the meaning. Why is Rudolf’s nose red? Or why does Santa wear a red suit? There are red berries on mistletoe, red strips on candy canes and the wise men gave three gifts to Jesus: Gold, frankincense and myrrh. I thought maybe myrrh was red based, but was not certain until I looked it up. It is. 🙂 I found this site so interesting! http://science.howstuffworks.com/environmental/life/botany/question2831.htm. And last, when I think of myrrh, I also think of red rocks. I lived near Denver’s Red Rocks amphitheater. Beautiful! There is also the Garden of the Gods in Colorado Springs and my personal favorite that I hope to see someday: Petra (Mount Hor, Jordan). Truly beautiful! 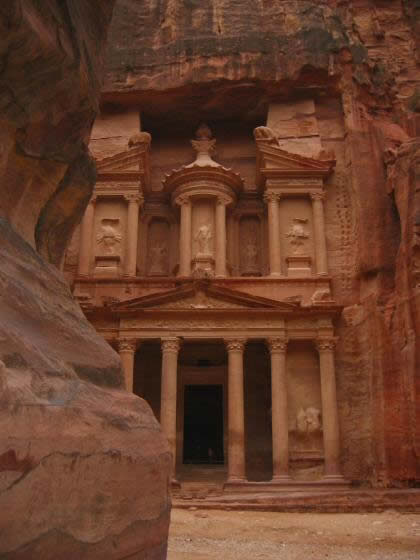 From: http://www.oddee.com/item_89087.aspx (If you love history and architecture, then read this site. It is about the 10 lost cities.)

Practical uses: STOP signs, which were not always red. In fact there were no such things as stop signs at the beginning of the 20th century. You think seeing a person run a stop sign or run through a red light today is maddening, listen to this:

At a time when there were no driver’s licenses, speed limits or clear lane demarcations, the notion of a stop sign was revolutionary. In fact, aside from the occasional road markers letting riders on horseback know how far they were from the next city, there was no road or street signage at all. (Greenbaum and Rubinstein, December 2011.)

Sounds pretty chaotic! Even when they were put into place they were “a 2-by-2-feet sheet of metal with black lettering on a white background” (Greenbaum and Rubinstein). It wasn’t until 1954 that they turned red. There are other warning signs. I took this picture at an old mill. I thought it was hilarious considering my history of falling and weak ankles: 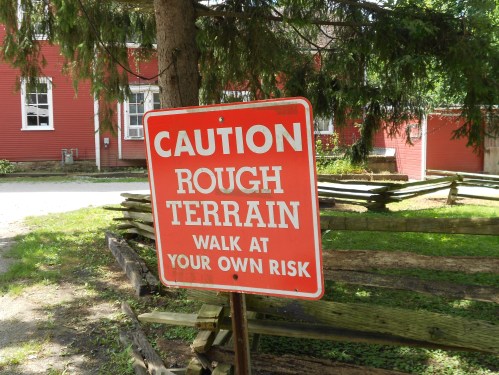 Fire extinguishers, EXIT signs in buildings, rear lights on automobiles, and flashing lights of police, fire and ambulance vehicles all contain red. People who take pictures like to take out red: reduce red-eye functions. Growing up, we graded papers at school with a red pen. Red helped you see your mistakes. Have you ever read the classic book, The Scarlet Letter by Nathaniel Hawthorne? The scarlet letter is an uppercase A attached to Hester’s dress, representing the shame and punishment of adultry. Although I was not a big fan of the book in high school, I would like to read it again realizing that there is so much imagery and symbolism that I might not have understood before. My Bible uses red print in the four Gospels and Acts to show when Jesus speaks. When I paint, I have to be careful; red takes over the other colors. Sometimes the blendings make a deep blend of purple, which helped on my mountain portrait…but other times if I use too much red then it ruins the painting. Likewise in opposite cases, I add red to bring out some flavor of an otherwise dull piece of art. Red is so practical.

What do you see in red? I started out with a short hand written list. The more I thought of the color, the more came to my mind. Take time this weekend to enjoy your favorite colors, whether it is red or another. Red is not necessarily my favorite color, but it was a great place to start (it is the first color of the rainbow you know–at least from top to bottom. I learned it as ROY G BIV. Others learned it the opposite way with violet starting, VIB G YOR. Makes more sense to me the first way.) 😀 More to come…

Duane Streufert. 2005, February 10. What Do the Colors of the Flag Mean? The Flag of the United States of Amercia. Retrieved April 20, 2012 from http://www.usflag.org/colors.html