Yesterday was hard. Not physically hard, but emotional. I turned in the keys to my apartment. I loved that place. It was hard to let it go. It was the first time that I have ever had a place on my own. It was in a quiet neighborhood; my patio faced the pond, bonus that it was on the first floor so I did not have to worry about stairs. I even had a garage so I did not have to scrap my car in the mornings and it was only ten minutes from work. I moved in the second week of November 2011, but between chemo every other week plus a family reunion at Thanksgiving, Christmas season work bliss and my sister’s wedding the first weekend of January, I had just officially settled in a few short weeks before the blood clot hit. I spent one night there two weeks ago. That was my last.

The time spent in my apartment, although short, has fun memories. I had enjoyed decorating, especially my 2-foot tree at Christmas. I hung my paintings and had a Greece/Rome corner in my living room which held my books, papers and photos from college days of study and travel. I hosted my little sister and some of her college friends right before finals in December for an evening of Elf (the movie) and snacks. I even gave a speech. 😀 (from Fozziwhig’s Christmas party speech on Muppet’s Christmas Carol!) 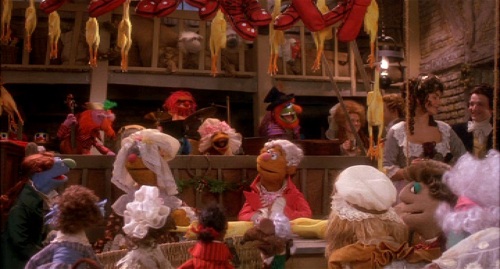 Of course, there were other aspects that were not so fun such as killing spiders. One night, I was preparing for the next day. I think it was a chemo weekend, because I was headed over to my parents that night. Anyway, since I don’t own a dresser, I keep my “unspeakables” in a little basket near my shoes. I was just about to grab some socks and the biggest wolf spider crawled out, and fast! I screamed so loud and jumped back as far as I could. It moved and I screamed again. It crawled behind the main bedroom door, so it was either try to run past it and get out in the living room or close the door and be stuck in the same room. I did not want it to go under my bed and it was far too big to kill with my shoe. I knew my Swifter stick was in the hall closet, so I started to move towards the door. Normally I would not do this, but because Dad would not believe me of how big the spider actually was, I took a picture of it. Yes. And it was so disgusting.

After I took my far off picture of the spider behind my door, I think my moving caused it to go out in the hallway. I was shaking and grabbed my Swifter as fast as I could from the closet, because the spider was now in the bathroom. I started hitting the floor with my stick, but kept missing. I have a purple city bathroom theme, so my bathroom mat is a nice dark purple; I am missing the spider every time I hit the floor because I cannot see it. Finally, it crawled off the mat and I hit it. I think I killed it the first time, but just to be sure I hit it a few more times. I have some sort of arachnophobia or something, because I was shaking so bad. I even took a picture of the dead spider just to make myself feel better. Of course I deleted them after I showed my dad. 🙂 I did not want to pick it up with just a kleenex. I got a trash bag to cover my hand and then grabbed several napkins. I threw everything in the trash–spider, napkins and bag. Then washed my hands. 🙂 I tell you–I have a serious spider problem! I packed so fast after that and put all my “unspeakables” in the wash. Such a funny story now, but at the time… I was traumatized. Lesson learned: never keep anything but your shoes on the floor.

I am thankful for the time spent in my apartment. It is a place I know God provided and even if it was only for a short time, I still enjoyed every part of it. It still does not make moving easy. To be honest, I am so confused. In Denver, I seemed to have it all put together. Here it seems like my life is falling apart. I don’t blame God or even ask “Why?” I think God is bringing me to a place in my heart where I can’t control my physical outcomes anymore, so I just have to trust Him to know that His plan is best. Maybe I took too much control in Denver. Even here, I thought I was fine doing things on my own. I am independent, yet my body is slowly becoming dependent. It makes a hard struggle between mind and body.

Most of my struggle the night before was guilt. I have been shown extreme mercy from my apartment complex who said if I turned in my keys by March 31st, then that would be it. No extra fees, nothing. Only God can ordain a situation such as this. I also have merciful parents who let me move back in with them for the time being. The mercy given has made me feel like I need to pay penance or something–prove myself worthy. Dad told me that I put the guilt on myself, because that was not their intentions nor the apartments intentions. I think it is part of my troubled spirit finding peace in the situation. I was still struggling with guilt when I got out of bed in morning. While at work, the song “In Christ Alone” (Townsend and Getty, 2002.) came to mind, especially the last chorus:

No guilt of life, no fear in death–this is the power of Christ in me. From life’s first cry to final breath, Jesus commands my destiny. No power of hell, no scheme of man can ever pluck me from His hand. ‘Til He returns or calls me home, here in the power of Christ I’ll stand.

No guilt in life. God is still working with me in this area. I did not paint this out of guilt, but I did want to show the apartment how grateful I am for their mercy. I could not think of a title. I sat in the car before I went into the office and just stared at the painting. My mom finally suggested Matthew 5:7, “Blessed are the merciful, for they shall be shown mercy.” And that is what I put. 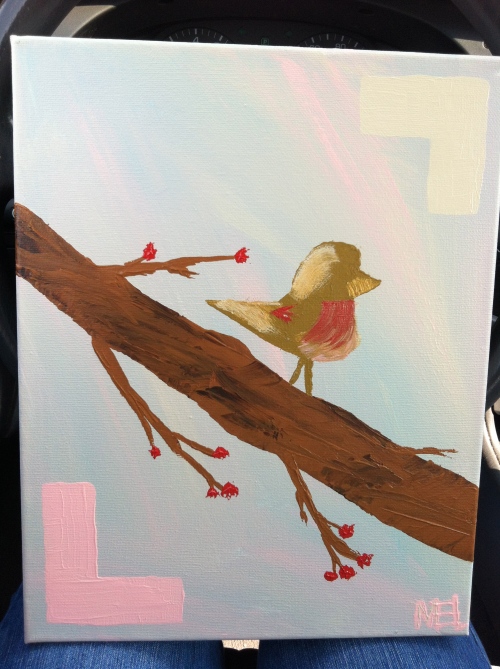 So where do I go from here? Not sure. Just praying for direction. My mom gave me these verses today: “Trust in the Lord with all your heart and lean not on your own understanding; in all your ways acknowledge Him and He will make your paths straight.” ~Proverbs 3:5-6. Seems like the best way to restart the journey.